Thanks to Cyril Jones for providing article from his Archive.
In 1928, 80 years ago, the National Eisteddfod was held in Treorchy. The competition for male choirs in excess of 100 choristers attracted 10 competitors and was performed in front of an audience of 20,000. The test pieces; Songs of the Spirits over the Waters, (Schubert) sung in eight part harmony, and Cán I’r Eos, (J. Owen Jones).
Pendyrus preparation for the competition was interrupted by them having to prepare for a prestigious 2 day concert event in Cardiff Castle, it was the occasion of the coming of age of the Earl of Dumfries, The son of the Marquis of Bute.
They were joined there with the band of H.M Welsh Guards, the party was attended by some 2,000 guests.
Although then being in their infancy, and of course their first ever National Eisteddfod attempt, they came a creditable 3rd. behind, Swansea & District and Morriston United who were joint 2nd with Dowlais.
The photograph is of the 1928 choir.

World acclaimed musician travels to Rhondda tonight Monday Feb 12th. to provide a master class for Rhondda’s own Pendyrus Male Choir. Having secretly attended their 2017 Gala Concert, he expressed his desire to take of their rehearsal.
Pendyrus will have a guest conductor to take rehearsal this evening and they don’t come much more high-profile than this gentleman, Maestro Anthony Gabriele!
Anthony Gabriele has established an international reputation for conducting with tremendous passion born of a profound knowledge and understanding of the repertoire. He was awarded 2nd Prize in the 2011 biennial Blue Danube Musik Impresario (Vienna) International Opera Conducting Competition, hosted by the Bulgarian State Opera (Burgas).

Anthony studied conducting, composition, piano and voice at the Sydney Conservatorium of Music and since 1993 has amassed a prodigious variety of operatic and musical theatre credits as a Music Director, Conductor, Chorus Master, Language Coach, Vocal Coach and Accompanist.

He works extensively as a freelance conductor, arranger and orchestrator. He made his debut with the Royal Liverpool Philharmonic Orchestra in 2011 and conducted the British Philharmonic Orchestra in a concert of popular classical works, as part of the 2009 London Tower Music Festival. Anthony conducted at the National Theatre of Opera & Ballet Sarajevo and the Bulgarian State Opera Ruse during the 2011/2012 season. In January 2012 he conducted an Opera Gala at the Opera House in Almaty (Kazakhstan) with the internationally renowned Italian tenor, Fabio Armiliato.

As Music Director, he has conducted South Pacific, Blood Brothers, Ken Hill’s Phantom of the Opera, A Grand Night For Singing, Chess, CATS, Grease, The Wizard of Oz, Bye Bye Birdie, The Lion King (London’s West End, Sydney, Melbourne and Shanghai) and the West End production of Andrew Lloyd Webber’s The Phantom of the Opera.

Many thanks for the message from our friends Côr Meibion Pontarddulais 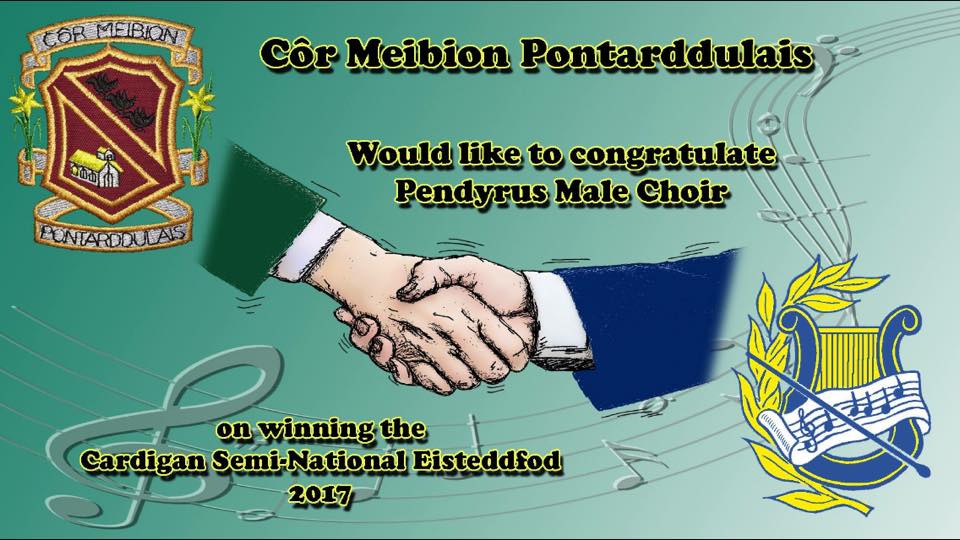 There seems to be much talk of male voice choral singing being in decline at the moment – the gentlemen of Pendyrus Male Choir are here to dispel that statement. As the largest of the five male choirs in the Rhondda Valley alone, they travelled from their Tylorstown base to rural mid-Wales to give a sell-out concert at China Street Chapel, Llanidloes for the Rotary Club.  The last time the choir performed at this venue was in 1959 and four members of the choir from that concert made this return visit. This concert raised over £3000 for the Rotary Club Of Llanidloes.

Choir compère and much respected author and historian, Professor Gareth Williams opened proceedings with a series of witticisms and introduced a wealth of musical offerings which included the rousing ‘Llanfair’, the beautifully atmospheric ‘Hiraeth’ and the epic ‘The Prayer’ from Lohengrin by Wagner.  Special mention must be made of the sublime solo singing from Bill Richards who soared above the choir in a stunning rendition of ‘Lily of the Valley’.  The Welsh hymns in the programme were given added sparkle with the inclusion of Scott Williams on the organ – a great addition to any male voice choir!

A number of new additions to the repertoire were given an airing including a Welsh translation of a folk song by Janacek called ‘Aredig’.  This year, the choir hopes to repeat their 2010 & 2012 success in the Gwyl Fawr competition in Cardigan and if they sing as well as they did in this concert, success should surely be coming their way!

The second half of the concert continued in lighter vein with selections from the choir’s ‘lollipop’ repertoire – a phrase used by Pendyrus’ Glynne Jones – a previous Musical Director of the choir.  A notable inclusion in the programme was a stirring rendition of Alwyn Humphreys’ of ‘What Would I Do Without My Music’ – the exposed opening was delivered with accuracy and was pitch perfectfollowing the a cappella introduction.

The performance from the choir was punctuated with a number of excellent soloists.  Nick Wayland-Evans gave a tranquil performance of ‘Caro Mio Ben’ by Giordani followed  by Ivor Novello’s beautiful ‘My Life Belongs ToYou’.

Sydney Richards belied her youth with her mature delivery of ‘Losing My Mind’ (Follies; Sondheim).  At 15, she certainly shows considerable promise – a name to watch in the future.

A regular soloist with the choir, Tom Richards exclaimed in declamatory fashion that he was “in love with another man’s wife” in his rendition of ‘Proud Lady’ (The Baker’s Wife; Sondheim).  This was followed by the beautiful ‘Till I Hear You Sing’ (Love Never Dies; Lloyd Webber).  It is easy to see why Tom has enjoyed recent success on the Asia Tour of Les Miserables – this young man has a very bright future ahead!

The finale of this fantastic gala concert saw all of the ‘forces’ joining together for a selection of hits from Boublil and Schonberg’s Les Miserables. The soloists were joined by Sarah Board who gave a fine performance as Cosette. The controlled singing from the choir in ‘Bring Him Home’ was particularly beautiful and Jordan Davies (from the choir’s first tenor section) gave a commanding performance of ‘Stars’.  The final chorus of ‘One Day More’ brought the capacity audience to its feet – and the praise was wholly deserved!

Stewart Roberts, the Musical Director, can feel justifiably proud of his boys after this concert and the choristers can feel lucky to have a man of this calibre at the helm.  Together with stalwart accompanist, Gavin Parry, Pendyrus surely has one of the bet music teams in Wales.