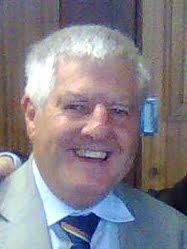 Choir President Since 2008
His Honour Sir Wyn Williams Kt QC
Wyn Williams was born in Ferndale in 1951, the son of Mr Ronald Williams, who for many years was Chairman of Côr Meibion Morlais.
He was educated at Rhondda County Grammar School for boys, Corpus Christi College, Oxford and Inns of Court Law School. He was called to the Bar (Inner Temple) in 1974, and has practiced as a barrister in Cardiff and London, was appointed QC in 1992, a specialist Chancery Circuit Judge for Wales in 2004, and High Court Judge in January 2007.
Wyn was knighted by her Majesty Queen Elizabeth in April 2007. Sir Wyn Williams lives in Porth, Rhondda, and has been closely involved in Tylorstown RFC for many years – he played in the 1st XV between 1969 and 1985 served on the committee 1985-1998, and as Chairman 1991-1995, he has been a trustee of the club since 1998. The Choir were delighted when he accepted their invitation to become only the fourth President in the choirs history.

The Choir currently enjoys the support of over 50 Vice-Presidents. They include many friends who have long-standing personal connections with Pendyrus, and distinguished representatives of the civic, cultural, professional, and commercial life of the UK, and of Australia, New Zealand, and the United States. They all make a valuable contribution to the life and work of the choir, whether through advice, assistance or sponsorship, and this is greatly appreciated.

The Pendyrus Choir also runs a “400 Club”, which is an important source of regular income. It comprises of members and friends of the choir, and their support is very welcome and much appreciated.
If anyone is interested in joining, for a contribution of £1 per month, you will have a chance of winning £500 in the Xmas and Summer draws and numerous other prizes from £50 down to £6 in each of our monthly draws.
Please see any chorister or contact Bill Richards, Peter J Murphy QC, Jack Harries or the Secretary, Graham Clarke for details, and to join the “Club”.

Covid-19 Limited Rehearsals have now resumed Mondays and Wednesdays, all socially distanced and held within latest guidance and regulations.